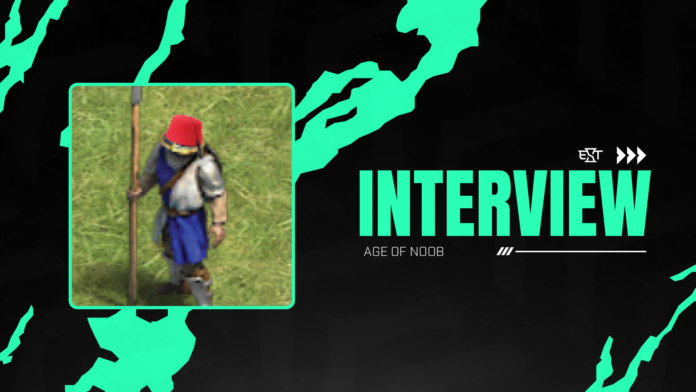 With have sat down with Age of Empires Youtuber Age of Noob and discussed the future of the series and his career.

Esportimes: Hi thanks for being here, can you talk about yourself for a bit?

Age of Noob: Of course, I am known as Age of Noob. I started my YouTube channel 3 years ago. Ethnically I am a Turk and have been living in Canada for a decade. I have finished my university here and I am currently working in the software industry. Age of Empires have been in my life since childhood. I started with the Age of Empires 1 and then went on to play the other games in the series. I used to play the games with my friends, we had a lot of LAN parties when Age of Empires 2 came out. When I was in high school there was Forgotten Empires, which was an unofficial mod for AoE 2. At the time the game was played mainly through Voobly. The game’s scene was much smaller compared to today. When Age of Empires 2 HD Edition came out, I started watching Viper & T90. Several years later Microsoft announced the Age of Empires Definite Edition, which stocked my interest. I was in all the betas, though I wished they changed some core mechanics to make it comparable to what we have with AoE 2’s Definitive Edition.

Esportimes: So, is there an interesting backstory behind your name?

Age of Noob: Before I started the channel there weren’t any notable small scale AoE content creators. The community itself was very niche and geared towards the pros. When I got into the content creation side, I picked Age of Noob to emphasize that the majority of the community was consisted of noobs or non-pro players. I was also not that good at the game myself, around 1400 ELO.

Esportimes: You have been quite popular when it comes Age of Empires 4. Can you talk about that?

Age of Noob: Overall my channel has risen steadily, though at times there were some spikes in viewership. The first of these spikes happened when I mashed a Lord of the Rings scene with Age of Empires. I did a similar thing with Game of Thrones. Afterwards I had a huge increase in viewership during the first months of Age of Empires 2 Definitive Edition.  There were so many bugs at the time… When I made videos about these bugs my viewership spiked. When Age of Empires 4 got announced I promised myself to increase the overall content quality of my channel. For example, at the time most of the Age of Empires content was not on the level of Spirit of the Law. I changed my microphone with higher quality one and also started using scripts for my content. After that a started to focus exclusively on AoE 4. However, I still make some videos on the older games. At this point, if I post a quality video, no matter the game a have a consist viewership base. Though I still think I haven’t achieved the results that are on part with my efforts.

Esportimes: So, this is not your main job at the moment?

Esportimes: Can you speak more about your experiences on YouTube?

Age of Noob: First of all, reaching a point where you have a core viewership base is really hard. I currently have 22 thousand subscribers and let me tell you most of them are people who are truly hard-core fans of age of empires. Achieving this is really hard. Other channels with large subscriber base usually don’t get an equal number of views. Most of my subscribers usually watch most of my videos. For example, I reviewed an RTS game called Fertile Crescent and I got around 10 thousand views. It was an unknown indie game, so these numbers are pretty good for me. I started on twitch and a had a little following around 50. I started to put my Twitch streams on YouTube. These videos had around 100 views. At the moment a lot of people call me Spirit of the Law of Age of Empires 4. Several people started with that premise however with low viewers most of them stopped. I continued doing this for about 1.5 years with almost no viewership before I started to get some traction. To be successful on YouTube you need patience and luck.

Esportimes: Let’s talk about the games. What are your favorite civilizations?

Age of Noob: Franks in AoE 4 because they fit my playstyle. They are easy to boom with, their technologies are cheap, and they have high mobility. I have a lot of favorites in AoE 2. I love playing as Britons when I am in flanks. If I am playing as a pocket its Franks. In arena I like playing as Turks and Portuguese. Though I have to stay I usually random queue because I like to change my style. Lastly, for AoE 1 I like Babylonians solely because their workers have giant bone weapons that I liked as a kid. I have no knowledge of the meta so that’s the only reason.

Esportimes: What do you think about the future of AoE 4?

Age of Noob: I have been playing AoE 4 since the closed beta. The marketing of the game was really bad, things such as water affects, and graphics alienated a lot of people. However, people who played the closed beta knew that it wasn’t the case, it was just that the marketing of the game was horrible. Microsoft’s hesitance on showing real in-game footage did some serious damage. When the game released, things such as the lack of hotkey customization and bad icons made it seem half baked. If they had delayed the game and fixed issues like this the game could have had a larger player base. But because of such mistakes a lot of people lost interest. The game had a community council that advised on such things, but it seems the developer did not listen to them on some important issues. I did make videos about the in-game bugs but overall, their existence was damaging to the game.

Still, in my opinion, AoE 4 is better than AoE 2. If they can push forward with updates, I believe, that a lot of issues that plague AoE 2 can be fixed in AoE 4. AoE 4 has the potential because it is more friendly to casual players. The modding support, which was recently added, is extensive and players are already making some mods that improve some core issues such as arrow mechanics. AoE 4’s engine is fantastic and offers a lot of advanced features such as lightning and physics control. Features such as these are still not promoted in the marketing of the game. If this continues, the game might lose all of its steam. Community tournaments are already dying because of a lack in audience. In my opinion, AoE 4 lost a lot of players that are never going to come back. However, if they release a good DLC with tangible content, while also improving things such as modding and UI, we might see a resurgence. It also depends on if Microsoft is willing to continue its support via tournaments.

Esportimes: Lastly, do you think Red Bull Wololo: Legacy 2022 tournament can be a turning point for Age of Empires?

First of all, Red Bull Wololo 5 was the best tournament I had ever watched. It was great even for people who did not follow Age of Empires. It was a great esports event that was comparable to other big titles. The viewership numbers were also good. AoE 1 is also part of the Legacy 2022 so if that effects the active player base even, I can make some videos for that game. Secondly, AoE 2 and 4 will have separate tournaments at the same time so it will be interesting to see some AoE 2 players returning to 4. I think that was the intention of Microsoft, I don’t know the exact format but there is a chance for player base transfer. So, I am hopeful for Legacy 2022.

We thank Age of Noob for accepting our interview offer and wish him good luck in his future endeavors. You can reach and support him through the following channels:

Our Interview With Caster Daniel Drakos