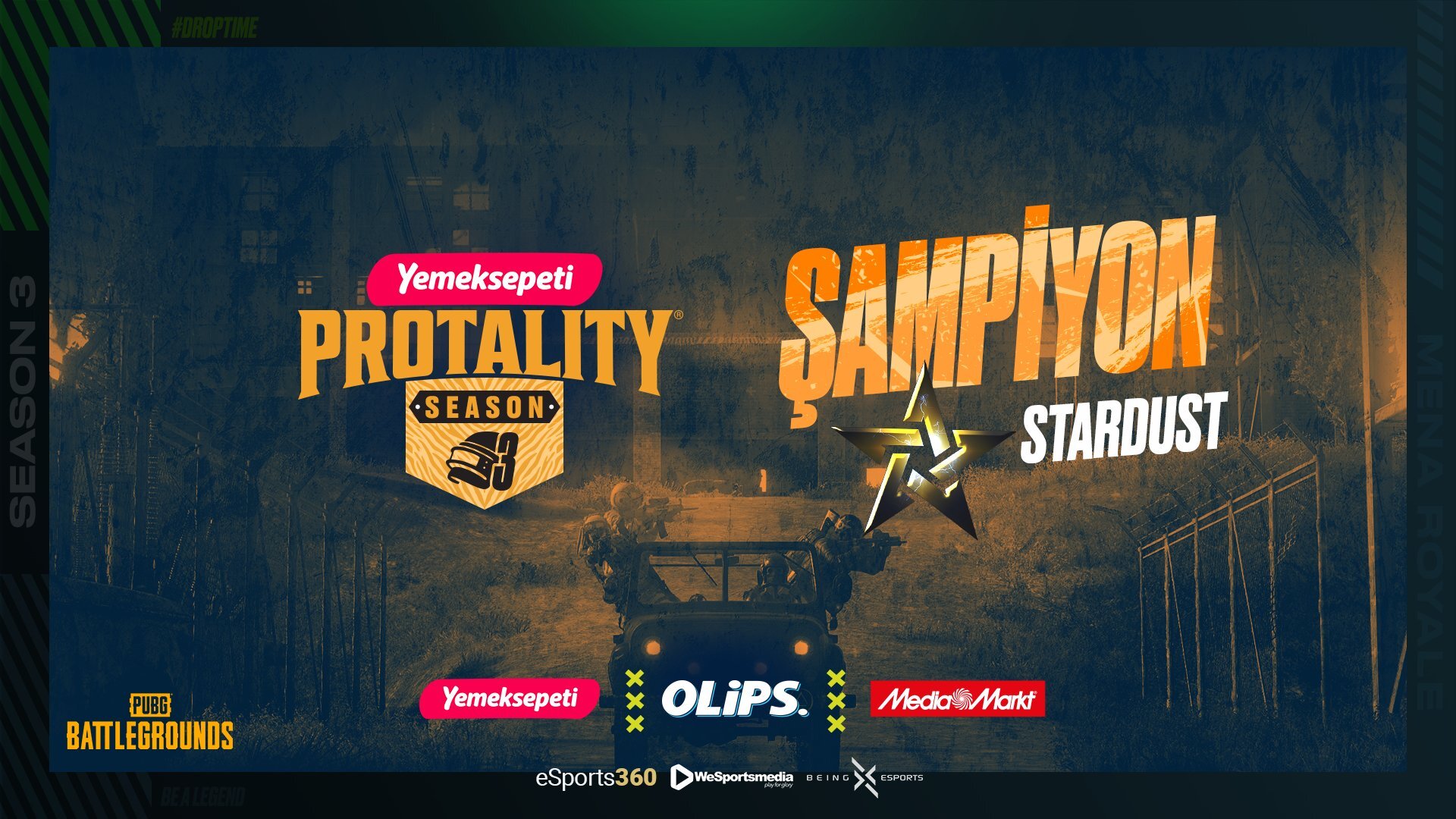 The third season of PROTALITY, one of the biggest tournaments of the Turkish PUBG competitive scene, has finally come to an end. The teams qualified for the grand final by competing through the Open Qualifier and Group stages. The team that won the championship at the end of an amazing season was Stardust.

Sponsored by Yemeksepeti, the tournament was reorganized this year to cover the MENA (Middle East) region. That’s why this season, teams competed in the Open Qualifiers and Group Stages.

8 teams from the Turkey region and 4 teams from the MENA region qualified to the Group Stage. Four invited teams joined these teams before moving on to the group stage. These teams were last season’s champion Galacticos (ORGLESS), previous champions FastPay Wildcats, SuperMassive Blaze, and Stardust.

The Grand Final series was breathtaking!

We witnessed amazing matches befitting the name of the PROTALITY Season 3 Grand Finale. Except for 5 teams, all teams managed to win at least once in 20 games played over 4 days.

It was very important to get a kill score due to the tournament format. Despite getting 2 wins, Unknownpros, which did not have enough kill scores, took 14th place, while Old Generation, which had only one win, finished the tournament in 3rd place.

Although Stardust and SuperMassive Blaze had equal wins, Stardust became the champion with a kill score difference.

Let’s take a look at the leaderboard at the end of the tournament.

According to these results, the awards were distributed in Turkish lira as follows:

The teams couldn’t get used to the new format!

When we look at the general results, it is seen that the teams cannot get used to the format. In particular, HOWL finished the tournament in 4th place as it was not as aggressive as its rivals despite winning three games. Similarly, Unknownpros won two games but failed to get enough kill scores and finished in 13th place.

In fact, this style of play can work in tournaments played with the WWCD format. But for the PROTALITY Season 3 tournament, it represents a pretty big tactical mistake.

While Galakticos was collecting kill scores with a very aggressive play, they could not win even a single match. We witnessed that the team, which is generally known for playing the end of the match well, failed this time.

Especially the top three teams showed us a great tournament. Because these teams, who struggled with their aggressive playing styles, really fought hard for the championship. Those who achieved victory in both global and local tournaments were teams that adopted an aggressive play style. For this reason, the audience can watch more exciting tournaments.

Ultimately, with this style of play, the Stardust team seriously opened up the gap with its rivals thanks to its superior performance.